Yes you read that right. Ethereum price on Wednesday fell to as low as 10 cents on GDAX, one of the largest cryptocurrency exchanges. This left investors in dismay (especially the ones who were margin trading at the exchange), and made a few traders very rich. 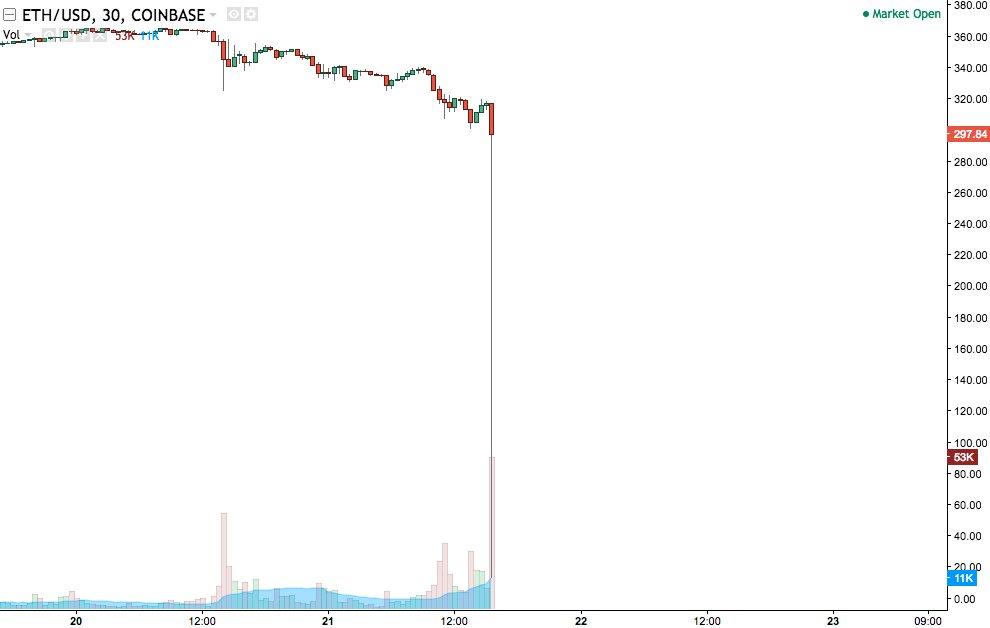 Adam White, VP of GDAX, wrote a short blogpost soon after the flash crash. He said :

“On 21 June 2017 at 12:30pm PT, a multimillion dollar market sell was placed on the GDAX ETH-USD order book. This resulted in orders being filled from $317.81 to $224.48, translating into a book slippage of 29.4%. This slippage started a cascade of approximately 800 stop loss orders and margin funding liquidations, causing ETH to temporarily trade as low as $0.10.”

So someone placed a multi-million sell order on the exchange. When this sell order came in, it needed to be matched with the buying orders – which brought the Ethereum price to $224 from $317.

But because this sell order was so huge, it created a domino reaction all the way down the order book. As each margin position was forced to liquidate, it ate up all the buy orders, which sent the price down further more triggering more liquidation orders — all the way to $0.10!

The first question that comes to mind – should the exchanges allow such an event to occur in the first place? Well, some would argue it is a free market. Anyone could sell or buy as much as they like. GDAX did not reverse any of the transactions that took place during the crash.

Adam said in the blog, “We are continuing to conduct a thorough investigation and will keep customers updated with any resulting actions. With that in mind, it is important to note that these trades are final in accordance with our GDAX Trading Rules (Section 3.1). Honoring properly executed orders is critical to maintaining the integrity of an exchange.”

The exchange is not at fault here. GDAX’s platform behaved exactly the as it should have. There is no reason for them to reverse the transactions. Rolling a filled order back breaks the integrity of GDAX’s promise.

Another reason that could have catalyzed the crash is the Status ICO. The badly designed ICO clogged up the network with a huge number of high gas fee transactions.

Civic Crowdsale was also going on perfectly, but had to halt for 3 hours due to clogging of Ethereum payment network. While the ICO was accepting payments in both Ethereum and Bitcoin, it later asked investors to pay only in Bitcoin and not Ethereum. The ICO has already collected $9 million on the first day.

Can it happen again?

Long answer: We have seen flash crashes happening in crypto markets from time to time, but nothing of this extreme. Usually they are termed as ‘corrections’ rather than crashes. That being said, this kind of crash shouldn’t be surprising at all. It is a symptom of the underlying problems created by the crypto market with too much capital flow into a market that isn’t fully developed yet.

This event isn’t the reflection of GDAX in particular. Something like this could happen to any exchange in the future. It just goes to show crypto market is still in its infancy stage, which is apparent by looking at 20x increase in daily trading volume since the start of 2017 without any fundamental change in market structures.

If GDAX had any kind of circuit breaker, in this case, it would have halted all ETH trading and give some time for the market to settle. The crash would still happen but it won’t go that deep.

A user on reddit argues why a circuit breaker on crypto exchanges is a very bad idea. He says:

“Cryptocurrency is volatile. We have to accept volatility for access to the increase potential. I believe creating a circuit breaker would actually open the door to even more market manipulation than it solves. This is because we have people that have the capability to buy and sell the ENTIRE order book. This effectively gives them an “on/off” switch for the exchange.”

While some people lost quite a lot of money, there were a few who managed to seize the opportunity and made a substantial amount. A user name John DeMasie posted a screenshot of trade history around the time of the flash crash on StockTwits. There was a buy order for around 3800 ETH priced at $0.10. This gentleman made over a $1 million overnight. 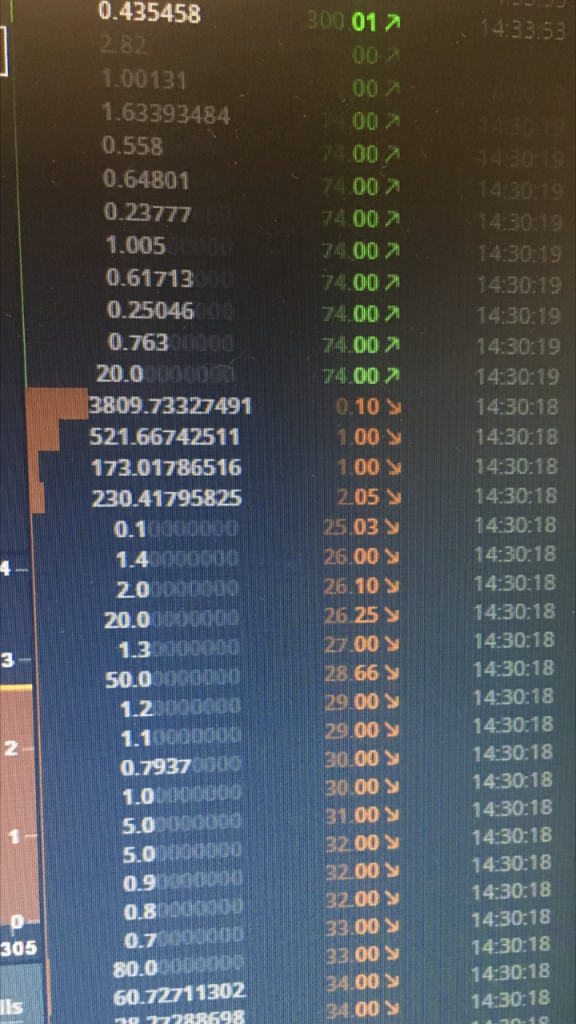 Although Ether price quickly recovered back above $300, the millions of dollars that investors lost due to forced selling of their positions will not be recovered. The exchange performed as it should have. Margin trading always carries a lot of risk and as traders we should never forget that.

Adam concluded by saying, “Our initial investigations show no indication of wrongdoing or account takeovers. We understand this event can be frustrating for our customers. Our matching engine operated as intended throughout this event and trading with advanced features like margin always carries inherent risk.”